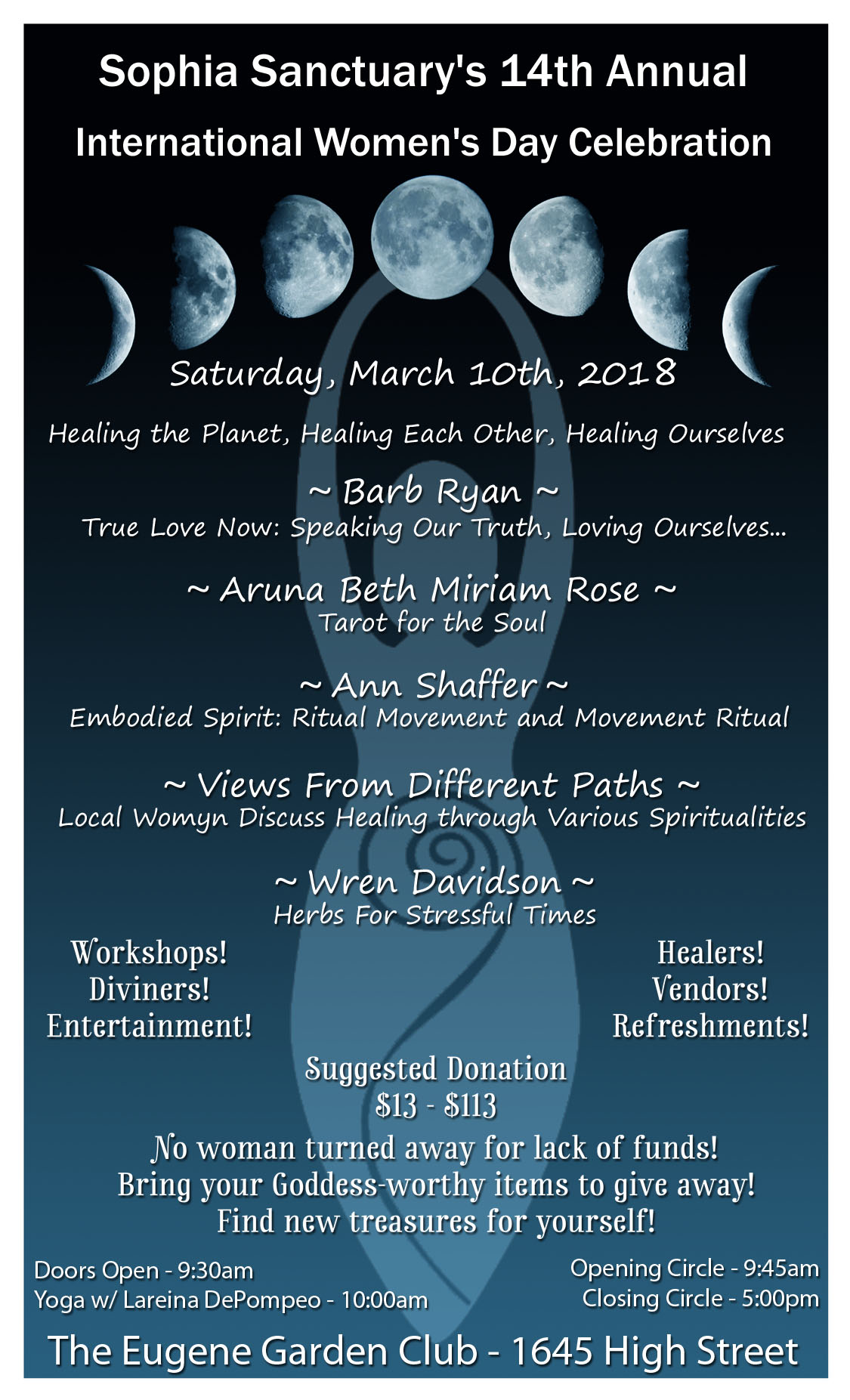 Schedule of Events (subject to change):

Donella-Elizabeth Alston: A co-founding mother of Sophia Sanctuary Women’s Temple, she is a Dianic Witch, a daughter of Oya and an ADF Druid-in-training.

Sherab Tenaj: My journey to Buddhism began in 2006 when I took Refuge in the Kagu lineage with Eugene Lama Tsong Tsing. For 10 years I have been on the board of Eugene’s Interfaith Prayer Services which happens on the 11th of each month. I am part of Mingyur Rinpoche’s Joy of Living Meditation Group. sherab@sevaplace.com

Isa Jennings:  My religion is love, and I am a fanatic.  Sufism        jennings.isa@gmail.com

Ruth Koenig: As a child, I remember the elder women in our church teaching us about Jesus:  his concern for the poor, his help for ill ones, his love of children and his stepping beyond the bounds of class and traditions. I have loved exploring other spiritual paths, opening to broader views, but I often return to the fundamental goodness of these elder women’s messages.  Christianity  ruth2341@msn.com

Ruby Matthews is a Grandmother, Early Childhood Educator, Tarot Reader, Priestess, and Lover of the Mother. I was a founding member of Goddesses Women’s Ritual Theater Collective and am a founding mother and active member of Sophia Sanctuary, a women’s temple without walls.   Paganism    rubyisawitch@icloud.com

Aruna Beth Miriam Rose is on a multi-faceted, mystic spiritual path resonating with Jewish, Buddhist, Goddess, Interfaith, Tarot and Earth Centered paths. I specialize in Folk and Jewish Spiritual Healing music, devoting my life to the relief of suffering and the restoration of the Feminine within and without. I am a lay leader of local alternative Jewish Renewal services at Ad Olam—Synagogue without Walls.   Judaism         bethr@efn.org

Josefina Baez describes herself as “a performer-writer-educator-director whose work explores the present and its encounters with the past and future.” She has been involved with multiple theater festivals and travels globally conducting Ay Ombe workshops and theater retreats. She often writes about her bi-lingual and bi-cultural experiences

Jannes Martinez is a panelist at the Center for Latino/a and Latin American Studies (CLLAS) Symposium Justice Across Borders: Gender, Race, and Migration in the Americas

This promises to be an interesting and informative discussion!

BRING GODDESS WORTHY ITEMS FOR OUR GIVEAWAY — ALL DAY

(Please keep in mind, this is a women only event)

The views expressed at any of these listed events do not necessarily represent the view of Sophia Sanctuary, the Matrix, or the members of this site. We provide listings for outside events of interest to womyn in the local area for information only. Members may submit events via the contact form on this site, but we do not guarantee that they will be listed on our events calendar. If you submit an event to us, please do so at least 2 weeks before the event start date. Thank you.